A kind reader commented yesterday about an aspect of Christian history that I never thought about before. Here is the comment copied from yesterday’s post, The Progressive’s  Regress.

Ancient Rome achieved great power because its culture was the most liberal of the important powers in that time. Rome did not, at first, require anything of the Jews except tribute and political loyalty. This was in contrast to the other empires of the day. This “broad outreach” or as our current Pontiff would style it, “ecumenism” allowed the Roman empire to keep order in a large geographic area with relatively few troops. Their attitude is best summed up by Pilate asking Jesus, “What is truth?” He asked in the modern sense; the question was to be received as a rhetorical one without a possible answer.  Truth could not be known. The Roman governor of Judea did not think he was speaking controversially. I am sure he felt he was expressing the view of the mainstream elite of his time. And I am sure he was. His was a political appointment.

This liberal culture of ancient Rome, from which we derive our legal system, was portrayed in prophecy as a beast with iron teeth that devoured all and trampled the leavings. Thus was prefigured the modern heresy.  God used Roman order to spread the Gospel. What His intentions are for the global elite of interlocking statists in our day we cannot imagine.  It is curious we note that they have set up the same supra-national communication and political network that allowed the early church to “go viral”. It only takes the right atmospheric conditions. Perhaps those storm clouds on the horizon, visible to all, will serve God’s purpose. Most assuredly they will. Pilate scoffed at truth three days before the Resurrection. The stiff necked generation got their sign of Jonah. The scoffers rationalized it away to their cost.

I completely agree that the Roman conquered but also allowed the conquered culture to enrich Roman life. Consider that Romans knew that the founders of Rome were orphans, perhaps the sons of a prostitute. The legend about Romulus and Remus tells the story of two boys that were abandoned near the edge of a marsh. A lupa nursed them and took care of them. Now lupa is a word with a double meaning, it may refer to a she-wolf or to a common street walker. Most likely, the mythical founders of Rome were nursed by a woman of bad reputation. It is easier to believe that a harlot fed the two newborns. A she-wolf most likely would’ve have them for lunch.

Because of their humble origins, the Romans carried that inferiority complex. They were not disciplined warriors like the Spartans, neither great merchants like the Corinthians, great artists like the Ephesians, nor powerful thinkers like the sons of Milo or Athens. They were the poor strong cousins of the wise Greeks, tenacious, practical, avid learners of new disciplines, a race born in the backwaters of the ancient world who had one foremost virtue: they knew not what fear was and yet, they were very impressed by other people’s abilities and cultures, like children who stood in awe of the very world they had conquered.

Graecia capta ferum victorem cepit.  The latin phrase means “Greece, vanquished by the Romans, conquered her savage conquerors.” (Horace)  The rough, uncultivated Latins were conquered by the arts and letters of the refined Greeks. If Greece had a genius for the arts, the Romans were faithful followers of the Greek spirit which they humbly recognized as their betters.

The consequence of that early contact with other cultures may have taught the Romans to respect the ecumene, the community of man they discovered as they annexed the  known world to the Roman order. Tartessians, Celts, Franks, Jews, Germans taught Rome many things but Romans paid back generously for those contributions. The Roman customs dignified the conquered, and the conquerors acquired many things from those cultures.

In practical terms the Roman roads, aqueducts, and fortifications made life more civil around Europe and the Middle East. When the Christians arrived, the world was ready for the spread of the Good News. The Roman roads became the roads of the Gospel. Three centuries later, Europe was Christian. The Roman civil order survived but Rome itself eventually became something different: a new thing called Christendom.

For the Israelites of the time, it was a time of crisis. Their religion and culture had barely survived the brutal push of Hellenization brought about by the conquests of Alexander the Great. They had asked the Romans for help to get rid of the Greeks, only to end up with both living inside their culture and dominating their trade. See, the will of God was for Israel to take on their universal destiny. That was the mission of Christ. Israel did not understand that their religious system was at the end of its usefulness. God had new things in store for them but they did not understand the call.

In time, the Church became the New Israel. The Jews had rejected the Messiah and the Messiah left them to their own devices for a while. In the meanwhile, the Church picked up the mission that Old Israel had rejected: to conquer the world using the steel-hard weapons of the spirit. It took just a few centuries but when it was done, the landless Jews were scattered all over the world while the Christians were anointing Roman emperors of their own. Having conquered Rome, the Catholic Church consolidated a Christian culture and began to evangelize the world.

Today we seem to be living in similar times, except for the fact that Catholics are now holding the short end of the stick. Our own Church has been infiltrated by connivers and knaves. Just as the Mosaic Religion reached its decline, the Catholic religion finds itself in a similar situation. The only difference is … the Christians know they are sons of the Resurrection, they know they will come back from this experience and thrive again.

The Roman roads are no longer useful but just as Rome worked for the Gospel without knowing it, the forces connecting the global electronic roads of this age do not know that they are working to create the classroom where the entire world can learn the ways of Christ. The effort is still uneven and somewhat chaotic but it is already taking place.

I do not know what Christ has in store for this new world. I only know it is a novelty that we cannot imagine, just as the Jews of 30 A.D. could not imagine conquering Rome and founding Christendom.

Stay tuned. This is getting interesting. 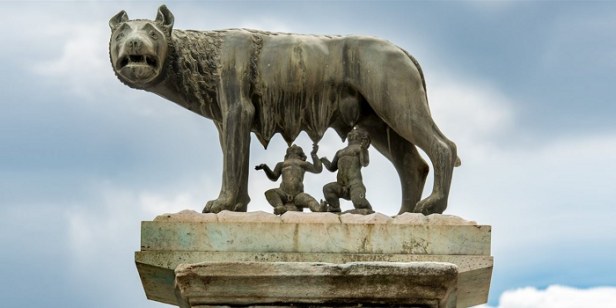 6 thoughts on “The miracle of the Roman roads”