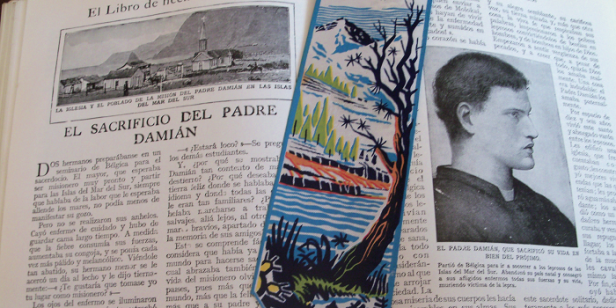 Some of you who follow my Facebook account know about this story. I said before that I don’t blame anyone who refuses to believe it, mainly because I am still in awe myself and it was hard for me to believe my eyes.

I was five years old and about to go into school for the first time, when my maternal grandmother presented me with a popular set of books. It was an abridged copy of Collier’s Encyclopedia in 20 volumes, perfectly translated into Spanish with additional material that included local history, poems, short stories, traditional nursery rhymes, etc.

I was still quite small but I had learned to read simple stuff. Armed with patience, I spent many long hours at the kitchen table reading those books and memorizing many passages that caught my very young imagination. We were still living in my hometown in Western Patagonia. It was a world without television, not even a phone line. Radio was limited to the local station of Radio Nacional that was really good in those days, playing Argentine folk music, classics, very sober official news, and a drama programme called Teatro del Aire, that presented the great plays of all ages.

I revisited the books for the next ten years until one day around 1968 my mother returned the gift for reasons unknown. Some family quarrel was the most likely cause. I was left with the memories of that interesting collection. I always wanted to buy a copy for myself but the prices were not within my reach. 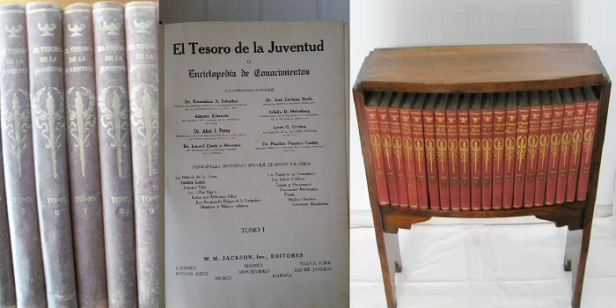 About a month ago I was browsing the local Internet in search of books of Fr. Leonardo Castellani when I saw a copy for a mere $20 (US) and jumped to grab it. The encyclopedia was offered by a  downtown book dealer.  I went to pick up the rather heavy and voluminous box one morning. Soon I was returning home with it. Once at home, I saw the books were rather dusty and some were moldy, so I decided to clean them a bit.

I was going to clean volume one when I saw the tip of something blue sticking out of the lower part of the book. I opened that page and I could not avoid gasping. The little blue tip belonged to an old book marker (see image) that my mother purchased in the souvenir shop of a hotel in Bariloche (Argentina) back during the holidays of 1966. I recognized it immediately. The marker was resting in a page displaying the main species of fish in the Atlantic. Those were my interests about half a century ago. The marker remained untouched for 50 years until I found it again.

I do believe I was given a special grace and I wonder if it has a meaning. Ever since I received the great grace of being baptized (one afternoon at The Hour of Mercy, August 15, 2001 in the Cathedral of The Most Precious Blood of Our Lord Jesus Christ in Westminster, London) I entered a period of permanent material losses that eventually led me to live here on a very minimal budget. As I descended into near total penury, I had the feeling that my experience was temporary. Why? Because there were constant reminders of the spiritual riches I was inheriting. Those very spiritual riches that many of my fellow life-long Catholics were tossing overboard with abandonment. I remembered the words of Joel 2:25-27, which still give me lots of hope:

So I will restore to you the years
that the swarming locust has eaten,
The crawling locust,
The consuming locust,
And the chewing locust,
My great army which I sent among you.
You shall eat in plenty and be satisfied,
And praise the name of the Lord your God,
Who has dealt wondrously with you;
And My people shall never be put to shame.
Then you shall know that I am in the midst of Israel:
I am the Lord your God
And there is no other.
My people shall never be put to shame.

I am also constantly reminded of the words of David:

You prepare a table before me
in the presence of my enemies;
you anoint my head with oil;
my cup overflows.
Surely goodness and mercy shall follow me
all the days of my life,
and I shall dwell in the house of the Lord
my whole life long.

The realization of the statistical near impossibility of finding those books lost so long ago to some stupid quarrel that no one remembers, gave me the assurance that a full restoration is near. I am also aware of the thousands of readers that follow this blog, and the many friends I have gained in the Lord. I may not have a salary but I am convinced that this is the best job I ever had, certainly the most satisfying.

I only wanted to share that joy with you today. Thank you for walking this new path with me.

Christ is risen and look! He is making all things new. 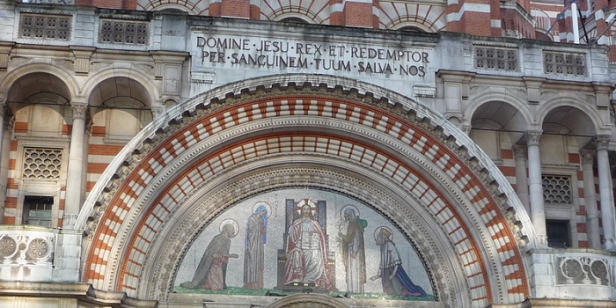 “The Lord has turned all our sunsets into sunrise.”
— St. Clement

5 thoughts on “A small restoration”