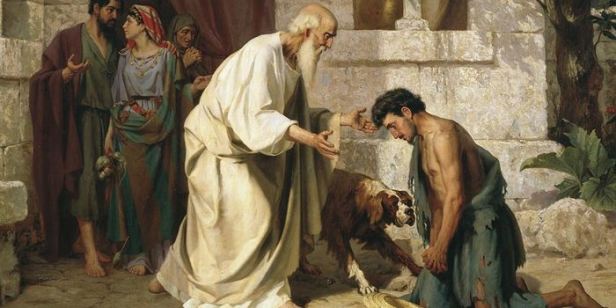 I still remember the moment, now decades ago, when I read this portion of Surprised by Joy. There C. S. Lewis admits to his own smallness and the greatness of God when his moment of conversion arrived.

“You must picture me alone in that room in Magdalen, night after night, feeling, whenever my mind lifted even for a second from my work, the steady, unrelenting approach of Him whom I so earnestly desired not to meet. That which I greatly feared had at last come upon me. In the Trinity Term of 1929 I gave in, and admitted that God was God, and knelt and prayed: perhaps, that night, the most dejected and reluctant convert in all England. I did not then see what is now the most shining and obvious thing; the Divine humility which will accept a convert even on such terms. The Prodigal Son at least walked home on his own feet. But who can duly adore that Love which will open the high gates to a prodigal who is brought in kicking, struggling, resentful, and darting his eyes in every direction for a chance of escape? The words “compelle intrare,” compel them to come in, have been so abused by wicked men that we shudder at them; but, properly understood, they plumb the depth of the Divine mercy. The hardness of God is kinder than the softness of men, and His compulsion is our liberation.”

I remember asking myself, “what are you holding on to?” Guided by grace, I saw a fairly complete catalog of my own miseries, my “tastes” the “things I liked,” etc. and I could really see the worthlessness of those things and, in reflection, my own true worthlessness before the awesome greatness of my Creator. And then I thought “how awful must be for Him to see me in this condition.” Until that moment my conversion was the combined result of intellectual discovery and curiosity. From that moment on the search turned inwards. I had to go down the rat hole of my own history, the one only I knew complete.

That was gradually followed by a sense of joy. God wanted me even in that rather disgusting condition. Like the father of the prodigal son, He was sending help: new sandals, a decent outfit, and some spiritual food. I could see Him waiting still at a considerable distance but waiting, beaming with satisfaction and saying: “I knew you loved me too!”

Who could fail Him? Who could return purposely to the depths of mortal sin after feeling the warm embrace of His redemption? Not me. The old trinkets lost their appeal. I still did not know the new, holy things that were going to replace them. The servants came one by one with sandals, a coat, a ring … but those were mere signs of the unfathomable love that sent them. That love was impossible to match but it compelled me to try the impossible.

My disposition barely had time to grow roots before it was tested to the limit. New opportunities to misbehave were suddenly available all over the place, rejection appeared among my new brothers and sisters, I saw the ugly face of the homosexual scandal up close even before it was openly manifested to the whole Church. As a result of many wicked attacks, I knew poverty again, like in my early days. Envy and strife surrounded me like a dark cloud. It was at that point that I learned that evil can only do so much. One can be hurt, one can relapse but God can transform those mishaps into the kind of experience that proves the depth of His forgiving love and mercy.

That kind of love seems to have left the upper echelons of the Church today. As the months and years go by, we do not see in our pastors a reflection of the divine love for us. In lieu of that, there seems to be a power superstructure abundant in posture and words but really poor when it comes to serve. The “smell of sheep” seems to come from a spray can, not from the flock.

Jesus called them together and said, “You know that the rulers of the Gentiles lord it over them, and their high officials exercise authority over them. Not so with you. Instead, whoever wants to become great among you must be your servant, and whoever wants to be first must be your slave — just as the Son of Man did not come to be served, but to serve, and to give his life as a ransom for many.” — Matthew 20:25-28 (NIV)

I contemplate with sadness how so many bishops of the Catholic Church treat the suffering of the little ones in their flocks with a dismissive attitude. A kind of atrocious suffering that they themselves have caused —  because every bishop is first part of a priestly brotherhood —  I see how sacred things are treated with carelessness by those who want to erase the line dividing the sacred from the profane. I hear very credible reports of crimes so heinous that can only come as a result of demonic inspiration. I hear dry orders barked from Rome with disgust. I watch the pastors play their games of power shamelessly becoming a spectacle to the world. I see and hear all that and I wonder why they persist. I agree there are bad pastors but I cannot understand why so few dare to denounce the sacrilege like men of Christ.

I know God does not give up easily but I am not God. That is the first lesson of Christianity: “Lord God, have mercy on me, a sinner!” He is God, we are the sinners. God will not give up until “the cup is filled to the rim” but I have to give up on bad pastors. I can’t see hearts, I can’t discern souls; therefore I must take a step back and “cease to touch the unclean thing.”

And he [Moses] warned the congregation, “Move away now from the tents of these wicked men. Do not touch anything that belongs to them, or you will be swept away because of all their sins.” — Numbers 16:26

I want nothing to do with those men. I remain in the encampment even if it is surrounded, knowing very well that God will rain punishment on pertinacious evildoers but I am not mixing with that crowd.

Nothing has changed. The ancient truths of the Church are still the same. We can continue without bad or indifferent bishops. We still have some good pastors left. I am under the impression that this crisis will suddenly be a thing of the past. I need to be clear to those who are still outside: the mission of the Church has not changed, our marching orders are still valid. Now more than ever we have to proclaim the truth of Christ. We have not been left to our own devices. Christ has not abandoned his flock, he never will.

I will sing of the Lord’s great love forever;
with my mouth I will make your faithfulness known
through all generations.
I will declare that your love stands firm forever,
that you have established your faithfulness in heaven itself.
You said, “I have made a covenant with my chosen one,
I have sworn to David my servant,
‘I will establish your line forever
and make your throne firm through all generations.’”
— Psalm 89:1-4 (NIV)

2 thoughts on “A prodigal moment”