Not long ago we read the parable of the wicked vintners. Now is a good time to look at it from a different angle. The first phrase “he began to speak to them in parables”. Using illustrations is one of the qualities identifying the Messiah, the Christ, the one born to rule the whole world as King.

Psalm 78:2 – I will open my mouth in a parable; I will utter dark sayings of old.

This psalm is one of the passages that prophesied how the promised Messiah would speak in parables and obscure proverbs.  “Parable” is used in the Septuagint, it comes from the Greek παραβολή (parabolē),  para (alongside) and bolē (to cast, throw, or toss). So we are introduced to the messianic message of the story while we are shown that it has more than one meaning “tossed” along. We must make an effort to catch it.

A man planted a vineyard and left it to the care of tenants. The vineyard has limits in space and time. It is fenced and it is trusted to the vintners for a season. It is also expected to grow and produce grapes, a stone-walled pit is built in advance for the vintage time. Each of the parable parts points at a different quality of the Kingdom of God. We must unfold its meaning carefully.

It is clear that the vineyard is the terrestrial realm where we humans live. It has clear boundaries that separate it from the spiritual realm and it was given to us for a limited time. It is also very clear that the kingship of Christ includes the spiritual world beyond because he moves freely from one to the other. He left the earth to the care of men and went “to another country”. The King goes where he pleases but he still pays attention to his earthly business. He intends to collect the fruits that rightly belong to him. His sovereignty encompasses all creation and all things are his property because he created them, he causes them to be, and has a purpose for them.

When the wicked vintners refuse to pay the lease — that is when we sin or are neglectful of our obligations to God — we deny the King what is due to him. When some insist in establishing a separation of Church and State that sets the rights of the State above the Divine Mandates, the rights of God are denied. The State is merely a temporary lessor.

The sovereign right of God is the very foundation of the Universe since it is God’s will that causes everything to be. Any part of the universal order that rejects God’s sovereignty does so at its own mortal peril. And yet the vintners reject the authority of the vineyard’s owner and decide — most foolishly — to keep the property for themselves.

Mark 12: 1-12 — Then he began to speak to them in parables. ‘A man planted a vineyard, put a fence around it, dug a pit for the wine press, and built a watch-tower; then he leased it to tenants and went to another country. When the season came, he sent a slave to the tenants to collect from them his share of the produce of the vineyard. But they seized him, and beat him, and sent him away empty-handed. And again he sent another slave to them; this one they beat over the head and insulted. Then he sent another, and that one they killed. And so it was with many others; some they beat, and others they killed. He had still one other, a beloved son. Finally he sent him to them, saying, “They will respect my son.” But those tenants said to one another, “This is the heir; come, let us kill him, and the inheritance will be ours.” So they seized him, killed him, and threw him out of the vineyard. What then will the owner of the vineyard do? He will come and destroy the tenants and give the vineyard to others. Have you not read this scripture:

“The stone that the builders rejected
has become the cornerstone;
this was the Lord’s doing,
and it is amazing in our eyes”?’

When they realized that he had told this parable against them, they wanted to arrest him, but they feared the crowd. So they left him and went away.

The scene ends with a sort of fulfillment of the parable. The enemies of Jesus understand enough to identify themselves as the wicked vintners and … they rebel against Jesus thus perfectly fulfilling the type! The State in this age is reacting the same way against the only Church that the King has left in place to collect the fruit of the world’s vintage.

Pharisees and Herodians hate to pay taxes to the Roman Emperor but they also hate to acknowledge Christ’s wisdom and authority. In their folly, they try to trap God in a box. They are determined to become the owners of the vineyard. In their blindness they do not see that they are going to lose their souls in the attempt.

Mark 12: 13-17 — Then they sent to him some Pharisees and some Herodians to trap him in what he said. And they came and said to him, ‘Teacher, we know that you are sincere, and show deference to no one; for you do not regard people with partiality, but teach the way of God in accordance with truth. Is it lawful to pay taxes to the emperor, or not? Should we pay them, or should we not?’ But knowing their hypocrisy, he said to them, ‘Why are you putting me to the test? Bring me a denarius and let me see it.’ And they brought one. Then he said to them, ‘Whose head is this, and whose title?’ They answered, ‘The emperor’s.’ Jesus said to them, ‘Give to the emperor the things that are the emperor’s, and to God the things that are God’s.’ And they were utterly amazed at him.

Mark 12: 28-34 — One of the scribes came near and heard them disputing with one another, and seeing that he answered them well, he asked him, ‘Which commandment is the first of all?’ Jesus answered, ‘The first is, “Hear, O Israel: the Lord our God, the Lord is one; you shall love the Lord your God with all your heart, and with all your soul, and with all your mind, and with all your strength.” The second is this, “You shall love your neighbor as yourself.” There is no other commandment greater than these.’ Then the scribe said to him, ‘You are right, Teacher; you have truly said that “he is one, and besides him there is no other”; and “to love him with all the heart, and with all the understanding, and with all the strength”, and “to love one’s neighbor as oneself” — this is much more important than all whole burnt-offerings and sacrifices.’ When Jesus saw that he answered wisely, he said to him, ‘You are not far from the kingdom of God.’ After that no one dared to ask him any question.

Jesus’ answer gives us a hint. The man understands that the words of the Shema Yisrael contain the greatest commandment. He is told “You are not far from the Kingdom of God.” Why? Because he listens without rejecting the words of Jesus. Jesus is the Logos, the Word. No one dares to speak before the one who has spoken all Creation into being. That is the proper attitude: shema,  listen.

Once we believe, we put ourselves before the throne of God. We listen to Him. His words are “words of eternal life” because through his words we are re-created in His image. That is the sense of the commanding words of Matthew 5:48 — “Be perfect, therefore, as your heavenly Father is perfect.” — That is not only a command to our will, it is a command to our very nature to change until it reaches the very perfection that God approves.

For this reason they are before the throne of God,
and worship him day and night within His Temple,
and the one who is seated on the Throne will shelter them.
They will hunger no more, and thirst no more;
the sun will not strike them,
nor any scorching heat;
for the Lamb at the centre of the throne will be their shepherd,
and he will guide them to springs of the water of life,
and God will wipe away every tear from their eyes.
— Revelation 7: 15-17

This week of Thanksgiving when we go to Mass and repeat those familiar words, let us meditate on their deepest meaning.

Lord God, heavenly King,
almighty God and Father,
we worship you, we give you thanks,
we praise you for your glory. 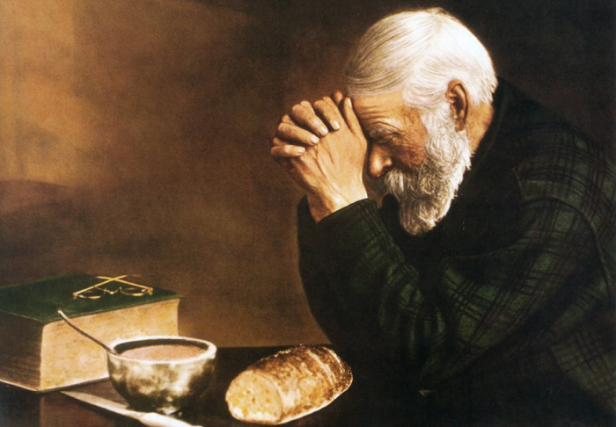 2 thoughts on “In Thanksgiving to Our Lord and King”