You have freedom not to do what you like but to freely do what ought to be done.

Recently it was reported that a person high in the Catholic hierarchy declared publicly that those who participate in building the projected wall between Mexico and the United States commit treason against their own country. Christians know very well what Jesus thinks on the matter of being kind to foreigners, hospes eram et collexistis me:  “I was a stranger among you and you invited me in” is the most common translation of that phrase found in Mattew 24:36

Matthew 24:34-36 – “Then the King will say to those on his right, ‘Come, you who are blessed by my Father; take your inheritance, the kingdom prepared for you since the creation of the world. For I was hungry and you gave me something to eat, I was thirsty and you gave me something to drink, I was a stranger and you invited me in, I needed clothes and you clothed me, I was sick and you looked after me, I was in prison and you came to visit me.’”

This is not a minor matter. That was one of the points Jesus selected to teach us who will be saved and who will not. The apostolic point of view follows that line also:

Hebrews 13:2  –  Do not neglect to show hospitality to strangers, for by this some have entertained angels without knowing it.

The writer of Hebrews reminds us of the occasion when Abraham received the three angels that announced him and his wife Sarah the miraculous birth of Isaac, their first and only natural son. (Genesis 18)

So apparently we are to receive all strangers with open arms and take them in, right? In the world of Abraham, or in the days of Jesus, being on the road meant to be in danger. Traveling was not easy and many suffered like the Samaritan in Jesus parable, or like Elijah fleeing the wrath of Jezebel. In those days people were on the move only for very serious reasons. The Holy family flight to Egypt comes to mind.

These days the counsel of Scripture is applied in some bizarre ways. We are told by the most judgmental people on earth “not to be judgmental” for example. Some expect Christians to be doormats by reasoning that if Jesus allowed Himself to be killed on the Cross, Christians should simply surrender to any lunatic wanting to kill us and our families. That is not sound reasoning. Some attempt to use the same kind of twisted logic when it comes to invaders, they pretend to pass the invader for a peaceful foreigner.

John 10: 1  –  “Very truly I tell you Pharisees, anyone who does not enter the sheep pen by the gate, but climbs in by some other way, is a thief and a robber.”

Obviously we have to use some degree of discernment when welcoming strangers. Those who arrive under cover of night, climbing the fence instead of ringing the bell, are not the ones we should welcome and protect.

A situation has developed in the United States where millions of illegal immigrants have taken advantage of lax or non existing border control, outdated visa systems, and biased refugee programs. The abuse is obvious but it is not coming from the perpetrators only, there are people in the US who benefit from the invasion.

Some employers are using the illegal workers for immoral profit. Desperate men and women without work or residence permits, work for less and are naturally more docile. Those employers justify their conduct saying that low wages make their products more affordable. They say that if they hire the more demanding local workers they will price themselves out of the market. Is that true?

The answer is counter intuitive: well paid local laborers are invested in the community. Employers can get cheap foreign labor but many of those are sending the money back home to build the place where they will live when they grow old – most illegal immigrants do not plan to stay forever, the vast majority will stay for a few years living like misers and saving money to take back home. The native worker instead is going to spend all of his earnings in living better participating in a much more sustainable and virtuous economic cycle. Think of it as two options: eat healthy or simply eat a spoonful of sugar every time you feel weak. The second option will keep you going at a cheap price for a while but in the end it will kill you. Employers that hire illegal aliens at low rates are doing serious harm to their communities.

Companies can pay good salaries. For example CEO’s compensation has gone up exponentially since the 1980’s while regular salaries have remained more or less flat in spite of inflation. Every extra million the CEO makes could pay for 10 employees making 100,000 or 20 making 50,000. But the truth is: as long there are illegal aliens for hire out there, the temptation for executives is to use that cheap labor to funnel the excess earnings into their own pockets. That ends up siphoning capital off the local commerce: too much money goes to overpay executives, and in turn the illegal migrant does not spend that much in the local market. The upward and outward capital flight stifles innovation, and generates local poverty. Since a good portion of those salaries ends up in Mexico and other countries, the local economy suffers a double blow. Add to that the damage to neighborhoods filled with transient people that really don’t care: “Why take care of my rental here in the US? This is not mine! I am building a nice house back home!” Transient illegal aliens are not invested in our communities, most of them are here to make a buck and go. The damage done by those bringing them in is immense!

The arguments coming from the ‘Chamber of Commerce’ ever interested in quick profits, and from the political left, interested in padding their electoral districts with dubious voters are all false. There is no obligation for a country to receive massive amounts of uncontrolled immigration. The first obligation of a government is to serve the interests of their constituents, not those of foreigners however needy they claim to be. To go even further and serve foreigners at the expense of native taxpayers is an even greater travesty.

1 Timothy 5: 8  –  Those not providing for their families, and especially for their own household, have denied the faith and are worse than those who do not have faith.

Catechism of the Catholic Church 2241  –  The more prosperous nations are obliged, to the extent they are able, to welcome the foreigner in search of the security and the means of livelihood which he cannot find in his country of origin. Public authorities should see to it that the natural right is respected that places a guest under the protection of those who receive him.  Political authorities, for the sake of the common good for which they are responsible, may make the exercise of the right to immigrate subject to various juridical conditions, especially with regard to the immigrants’ duties toward their country of adoption. Immigrants are obliged to respect with gratitude the material and spiritual heritage of the country that receives them, to obey its laws and to assist in carrying civic burdens. 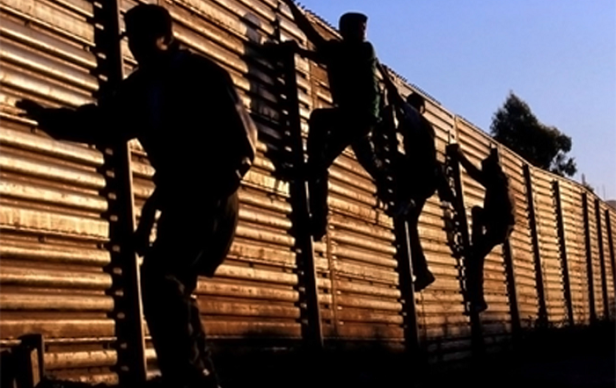